Somers Forge has over 150 years of experience in using hydraulic forging hammers, which is the mechanical forming of metal using a hammer. Hammer forging is the modern-day version of the pre-industrial blacksmiths work, with a hammer and chisel. 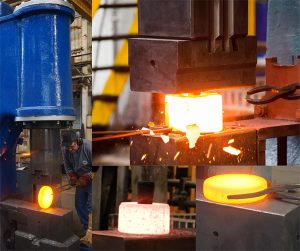 The action of the hammer is that of an instantaneous application of pressure in the form of a sudden repeated blow. This metal forming process works when a piece of metal is inserted into a die and then hammered until it has assumed the shape of the die, or it can be manipulated manually without a die. The lower die is a stationary part, while the upper part is a moving hammer dropped onto the workpiece to form it to a near-net shape. Hammer forgings have been continuously used for both open die and impression die forging. They are generally considered the most flexible in the variety of forging operations.

How are Hammer Forgings Used?

Hammers apply energy and cause deformation at very high rates to manipulate the material. They are therefore suitable for alloys that can be deformed rapidly without forming cracks and splits in the workpiece. In general, the hammer forging method is used for small items such as blanks or flange, with tool time being around 5 minutes for the finished forging. Time is critical to both the quality and longevity of products. Often items are multi heat and will be returned to the furnace when necessary to avoid cracking of the material, which would lead to problems later in the manufacturing process. Most items need to forged both very quickly and very accurately, so the experience and skill of the forging crew is paramount to the quality of the product.

The applications for the smaller hammer forgings are very varied, ranging from hard-wearing gear industry right up to the high integrity aerospace sector. These forgings cover a vast and diverse range of sectors encompassing both the more traditional applications up to high end more technological market. Hammers forgings provide a superior solution to both closed die forgings or machined bar stock.

Somers Forge can forge a range of components, from 1 kg to an impressive 140 kg using different hydraulic hammers. All items are forged according to customers requirements, with quantities being as low as a single piece item to short runs and often just prototypes forgings.